The Politics of Pensions

Kellar showed conference attendees how some retirement plans have used charts and graphs from publicplansdata.org (PPD) to illustrate how their plan compares with the national average on everything from the funded ratio and payment of the Annual Required Contribution to its return on investment assumption.

Q.  What are the most common misperceptions about pensions?
A.  Many people are not aware that states and local governments have made significant changes to the pension plans over the last decade. They also may assume that all pensions are poorly funded because they hear about the most about plans that are struggling.

Belarmino observed that many staff on Capitol Hill have limited knowledge of pensions and pension accounting.  That’s why we take the time to meet with them and explain the oversight that state and local pensions have, e.g., that governments must report their pension finances according to new Governmental Accounting Standards Board’s (GASB) guidance if they want to receive a clean audit.  We let them know that these financial statements are all available to the public and that there are resources like the PPD if anyone wants to do their own analysis.

Q.  Does the federal government have a role here?
A.  Pensions are overseen by state governments.  Belarmino explained that proposals such as the Public Employee Pension Transparency Act (PEPTA)  would require state and local governments to report their pension finances to the U.S. Treasury Department using a rate of return pegged to U.S. Treasuries.  That would create another accounting cost for local and state governments, require a new bureaucracy at the Treasury Department to collect and monitor the data, and would take away a government’s ability to issue tax exempt bonds if it failed to report this new calculation to Treasury.

When Representative Nunes first introduced PEPTA, GASB was still developing its new pension accounting guidance. PEPTA does not solve any pension funding problems and only adds another financial burden to governments. 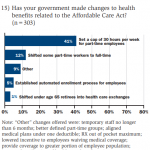 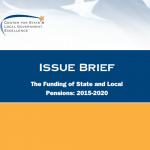