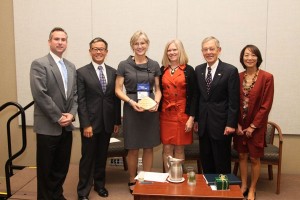 The Center for State and Local Government Excellence (Center) recognized San Francisco’s comprehensive approach to its workforce challenges at the National League of Cities (NLC) Congress of Cities in Phoenix, Arizona, on November 11.

In addition to recognizing San Francisco City and County, the Center presented former Senator George Voinovich with an award for his distinguished public service career. In his remarks, Senator Voinovich reminded the audience that attracting, developing, and retaining talented public servants is a challenge for all levels of government. He also shared some of his successes in gaining legislative support for many civil service reforms, including the Federal Workforce Flexibility Act of 2004.

The Center presented honorable mention awards to Coconino County, Arizona, and the local governments of San Mateo and Santa Clara counties, California, for their workforce programs. Coconino County’s human resources director, Allison Eckert, highlighted the county’s leave buy-back program, which has been popular with employees and helped the county avoid furloughs. Mountain View, California, Vice Mayor Mike Kasperzak accepted the award on behalf of the local governments in San Mateo and Santa Clara counties, for their strategic approach to finding and developing the next generation of local government talent.

NLC, ICMA, GFOA and IPMA-HR served on the awards panel and provided support for the professional development award. The Center thanks the following organizations for their sponsorship of the award:

Read NLC’s coverage of the event.